THIS BRIEF IS NOW CLOSED – WINNER TO BE ANNOUNCED SOON.

After their last cooperation on SPORES, a sci-fi-thriller, german based companies Benfeghoul Productions and Marctropolis Filmentertainment have another insane project on the go.

3D-specialists Digitale who worked on SPORES are also part of the team again. With SKY SHARKS they want to prove that genre cinema is not an all american subject.

When heavy drinking and Cannes’ sun come together, strange things are bound to happen at sundown. First there was a title. Suddenly there were ideas so crazy, absurd and disconnected from any meaning, it all could have been just a fever. Then a scriptwriter was hired who didn’t believe his ears when he was told the idea, and only accepted reality again when he got his cheque, but then gave full scope to his imagination and nailed a first draft that immediately got to the heart of the matter and left everyone believing they were on the right track.

Welcome to the crazy world of SKY SHARKS…

THIS BRIEF IS NOW CLOSED – WINNER TO BE ANNOUNCED SOON.

“Deep in the ice of the Antarctic, a team of geologists uncover an old Nazi laboratory still intact where dark experiments had occurred. In order to conquer the world, the Nazis created modified sharks who were able to fly and whose riders are genetically mutated, undead super-humans. A military task force called “Dead Flesh Four” – reanimated US soldiers who fell in Vietnam – is put together to prevent world downfall.”

Please send all entries to simon@alternativemovieposters.com or via our Facebook page. 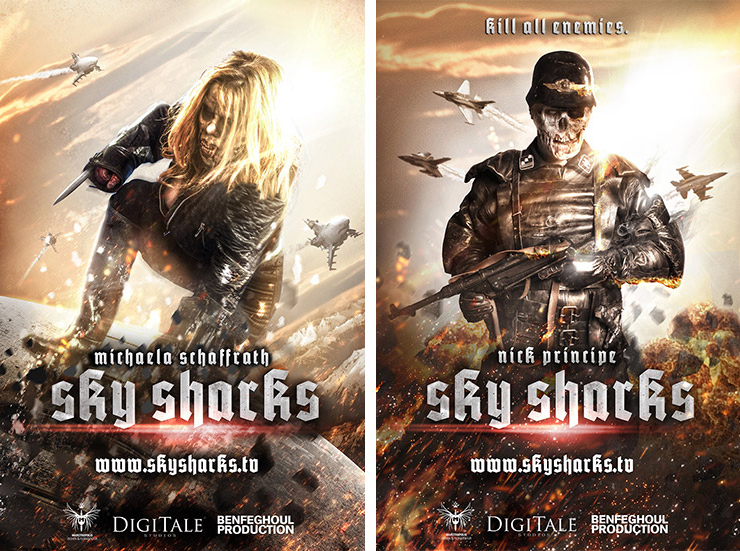 Sky Sharks Around the Web: